If you are pretty good at pulling pictures and videos, pointing out the joke in them, and presenting them contextually, you are well on your way to winning a lot of admirers. Memes are quite impressive, they have grown in popularity and relevance in the past two decades. Apart from the humor they deliver effortlessly, memes are quite a powerful marketing tool.

When used properly, memes are a low-effort marketing strategy. A humorous and effective medium to connect with an audience and drive organic engagement. Memes are quite versatile; regardless of their social diversity has relatable memes. Even the biggest brands like Netflix, Mcdonald’s, and Chipotle have jumped the meme-marketing bandwagon and seen consistent and great results from such moves.

The crypto market has meme coins to thank for a good portion of its market capitalization. From the early day bitcoin memes to projects built solely on the meme market. Valuing the whole meme market is tedious, but several cryptocurrency projects that drive their major relevance from memes are valued at several billions of dollars. These projects are popularly known as Meme coins and have grown astronomically since the original meme coin – Dogecoin came to relevance and spread across the crypto space.

What are Meme Coins?

You’ve probably heard about Dogecoin, Shiba Inu, or even Santa Floki inspired by Elon Musk’s Christmas tweet. Meme coins might sound and appear funny, but they had the biggest ROI (at the individual peaks) in the 2021 bull run. Thanks to dogecoin’s success, meme coins quickly proliferated. Before this wide-blown success, a couple of projects similar to dogecoin have existed and served the same purpose – fun and community participation.

Simply put, meme coins are cryptocurrency projects built around joke concepts. Most popular meme coins are dog-themed, but many are also named after and built around certain celebrities, politicians, food items, and popular movies. In contrast to ‘blue chip’ projects, meme coins are less about technology and solutions and more about fun, humor, and community engagement. They are fun, humor-filled, and friendly.

Meme coins present a low-entry barrier; on the technology side as well as the investment side. On the technology side, creating a new meme coin would require a few lines of code and an average understanding of blockchain and smart contract technology. For investors and cryptocurrency enthusiasts, meme coins are usually valued at pennies per token and thus look ‘cheap’. In addition, the vibrant and less-nerdy community built around meme coins makes it pretty easy to grasp the (very simple) idea and be a part of the community.

Meme coins do away with the ‘boring’ blockchain terminologies and focus on building on their biggest facility – humor. The popular orientation; “Crypto is fun, but meme coins are even more fun” is justifiable. 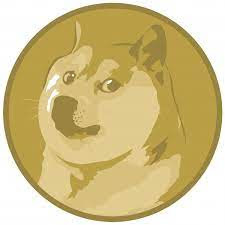 Jackson and Billy built dogecoin to be completely fun and friendly. The technology, mining system, and tokenomics were developed to simplify participation. Instead of the high-level mining requirements, other cryptocurrencies were known for then, dogecoin could be mined with a small amount of computing power.

In the early days of bitcoin, when the majority of cryptocurrency communities were engrossed with deciphering and developing complex computing protocols that complement the blockchain, Dogecoin represented a huge deviation from every other cryptocurrency. However, its major approach isn’t different from the general idea of decentralized payment systems.

Thanks to simplified technology and cheap mining requirements, Dogecoin quickly grew in popularity. Spreading through the crypto space, the Dogecoin community quickly became a prominent and generous community; funding many mainstream charitable events and notably funding the Jamaican Olympic team for the 2014 winter Olympics campaign in Russia.

Dogecoin’s gradual growth caught steam when it caught the attention of mainstream celebrities who quickly became a part of the community and Dogecoin evangelists. The jaw-dropping growth of Dogecoin and its 2021 bull run heroics is widely attributed to Tesla and SpaceX founder – Elon Musk.

Starting as a joke currency and fork of bitcoin, Dogecoin has grown into one of the biggest cryptocurrencies. Its adoption has wandered beyond contextual and humorous pictures and videos on the internet.

The success of Dogecoin led to an outpouring of attention towards meme coins and a subsequent proliferation. It’s safe to say that Elon Musk facilitated two very interesting trends; electric cars and meme coins.

The meme coin market is a wide one, however, there are some very notable ones. Apart from Dogecoin and Shiba Inu, many other meme coins have grown in relevance over the past few years, we take a look at some of them. 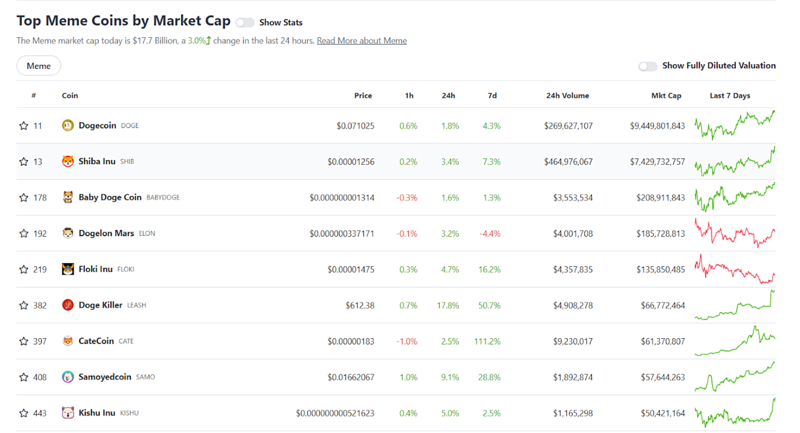 [Refer to the earlier section for the history of Dogecoin] Dogecoin (DOGE) is arguably the most popular meme coin. A pioneering figure in the meme coin market. It has gained constant admiration from Elon Musk who tips its economy and technology over that of bitcoin and any other cryptocurrency.

Ryoshi created Shiba Inu (SHIB) in 2020 as a direct competition to Dogecoin. In July 2020, 50% of Shiba Inu’s supply was sent to Ethereum blockchain founder, Vitalik Buterin’s wallet, in what appears to be a marketing stunt. But the founder donated 10% of the Shiba Inu’s supply allocated to him to the India COVID-crypto relief fund and burnt the rest of it.

While Ryoshi has remained an obscure figure like Satoshi Nakamoto, Shiba Inu has exploded in popularity since its creation. There are probably more Shiba Inu token holders than Shiba Inu dog owners. This is considering the fact that Shiba Inu is one of the most popular dog breeds, especially in Japan.

Shiba Inu token’s growth has also sparked an increase in demand for Shiba Inu dogs. Rescue centers and pet shops in the United States and other countries have recorded a spike in the number of customers queuing up to adopt the celebrated pet.

Shiba Inu reached its peak market capitalization of $36 billion in October 2021. Amidst widespread criticism, it was quickly listed on top cryptocurrency trading platforms and emerged as a true challenger to Dogecoin. Just like Dogecoin, it flaunts a vibrant and generous community.

Baby Doge Coin (BABYDOGE) flaunts a deflationary token system and a passive income for holders. It operates on the Binance Smart Chain (BSC) and rewards holders from the 5% tax charged for every sale of transfer transaction involving BABYDOGE token.

An Elon Musk tweet attributed to it sparked a price jerk. Since then, it has built itself, a reputation and climbed to the third biggest meme coin.

Elon Musk is a prominent figure in meme coins’ rise to prominence. He is not alone in this.

Dogs have played a major role as well. Dogelon mars (ELON) derives its name from the biggest role players in the meme coin community. Dogelon Mars started off as just every other meme coin, driving its value from comic and witty arts, it has since then expanded its utility by embracing other concepts like NFT and charity and hopes to be the interplanetary currency when life eventually moves to Planet Mars.

Dogelon mars community devotes part of her treasury to helping victims of cryptocurrency scams recover from their losses through donations. There are over 540 trillion ELON tokens in circulation on the Ethereum blockchain. Like Shiba Inu, 50% of Dogelon Mars’ supply was also gifted to Ethereum blockchain founder – Vitalik Buterin.

Inspired by Elon’s Dog – Shiba, Floki Inu (FLOKI) is very much like any other meme coin. A charitable community tailored to suit the meme culture. Floki Inu is also expanding to integrate other concepts like DeFi and NFT as part of plans to drive more utility for Floki – its ecosystem’s token. It is also building a crypto education and gaming platform. Over 9 trillion FLOKI tokens are in circulation on the Ethereum blockchain.

SafeMoon Inu (SMI) has a passive earning system integrated into its smart contract. It rewards holders with 2% of the ‘sell tax’ accrued from every token sale/transfer transaction. SafeMoon developers are also working on a blockchain gaming platform and NFT integrations. One trillion SMI tokens are in supply, the total supply is already in circulation.

Why are Meme Coins so Popular?

Meme-concept coins are not only growing in popularity, but they are also growing in terms of token count. Over 80% of the existent meme coin were created in the last two years. Most Meme coins emerge as modified copies of already existing ones and are usually formed by a fraction of the community. Over 70 meme coins are dog-themed, a reflection of the divergent evolution from Dogecoin.

Meme coins are lustrous, they are famous for posting rapid gains and reaching incredible market capitalization and popularity levels in a very short period; these quick pumps are due to a couple of reasons below.

Hype marketing has played out well for a good number of cryptocurrency projects.

Well-planned shills by a group of people could create thrills and lure potential investors into investing in a project despite having no clear information about the project. These projects sometimes involve prominent cryptocurrency influencers and mainstream celebrities to create these shills.

If done well, hype marketing could override utility and push a project to tangible price levels regardless of the proper utility it presents. This growth despite being organic is built on ‘unverified beliefs’ and bloated utility. Meme coins adopt this strategy and utilize it better than many other cryptocurrency projects. A successful shill exercise sends the token’s price to ‘the moon’.

Fear of Missing Out (FOMO)

The constant price jerks witnessed in the crypto space are driven by ambitious investors jumping into new ‘exciting’ projects with hopes of making some gains or at least not missing out on the project’s potential success. Fear of missing out on further profits.

The Future of Meme Coins

Going into the future, many meme coins might struggle to grow past the ‘pump and dump’ reputation they are labeled with. They hold one thing in essence, ‘communalism’. Interesting, to be fair; group marketing creates an enormous hype and could drive a huge buy pressure on the concerned project. But this alone is not capable of sustaining value in long term.

Contemporary meme coins are switching orientation and deviating from the meme culture as their principal source of value.

Meme coin projects are stretching beyond the meme boundaries and leveraging other lucrative concepts. NFTs, GameFi, and Metaverse, these inter-related concepts are being utilized by meme coin projects, a trend that could get even more popular in the future.

How these will affect the price growth is unpredictable. However, meme coins are in continuous evolution, the past few years have brought lots of changes to the concept, and more changes are bound for the future.

If you enjoyed this article, check out our video on Shiba Inu vs Dogecoin!

Joel loves discussing cryptocurrency and blockchain technology. He is the founder of CryptocurrencyScripts.
Follow the author on Twitter @agboifesinachi